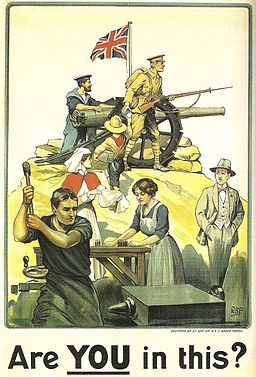 War between the Central European Powers (Germany, Austria-Hungary, and allies) on one side and the Triple Entente (Britain and the British Empire, France, and Russia) and their allies, including the USA (which entered in 1917), on the other side. World War I (1914-1918) has often been described as "the war to end all wars." Instead, it was the harbinger of a completely new type of warfare in which technological advances enabled belligerents to kill or injure vast numbers of soldiers and civilians and to destroy cities with greater efficiency By the end of the war in November 1918, tens of millions of people were dead for no clear purpose. Rather than ending all future warfare, the dissatisfaction that grew out of peace treaty negotiations led in great part to the outbreak of World War II in 1939.

Image: A British government poster used during the First World War to promote the war effort - from Wikimedia Commons

Magazine and journal articles, reference works and primary documents on World War I