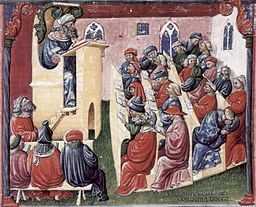 Period in Western European history that followed the disintegration of the West Roman Empire in the 4th and 5th cent. and lasted into the 15th cent., i.e., into the period of the Renaissance. The ideas and institutions of western civilization derive largely from the turbulent events of the Early Middle Ages and the rebirth of culture in the later years .

Magazine and journal articles, reference works and primary documents on the Middle Ages